Off the routine, via a mutual friend, met this well built guy from Rajasthan. A year elder to me, soft spoken by nature, he shared his struggle in Bollywood. A decade into industry he has worked as bouncer, model,graphic designer,choreographed ramp walks and supplied bouncer on film sets. All the time dreaming to be an actor these odd jobs helped him earn food and shelter in dream city. For when he failed to do so he has survived on vada pav and foot path. Finally he has worked in some small roles in big movies and big roles in small movies.

His ultimate goal: to work in a big role in big movie, but in a negative lead.
When asked why? His answer was simple, without God father/cash I cannot sustain positive lead roles
Posted by Vigneshwar at 3:41 AM No comments: 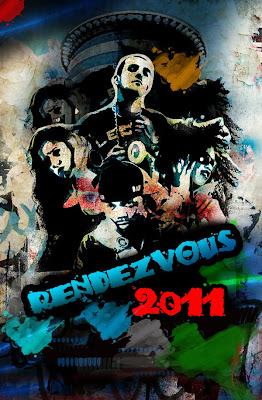 This is my 50th post.
It is more than a year I blogged. Not for reason I had no time to blog, but I had another place to blog where there were cheerful bunch of readers ever ready to like,comment and criticize.
This post is dedicated to all of them, all the Robosoftians.
Not always we make decisions with our full conscience, sometime due to compulsions, some time due to our own ignorance. May be for this reason the bunch of us 300 odd people, were/are always considered as compromisers who opted to work in small town Udupi as we had no better options.
It may be true but then there will be some reason why only 300 make it from nearly one lak applicants every year.
For the sheer individuality we possess we often put up varied display of emotions, which at times confuses folks around.
On 28th of this July we witnessed how the same diversified individualism collated to present whole new dimension of talents present in us.
I was amazed to see how varied talets we "300" possess.
Hiphop, classical, Yakshagana, a magical keyboardist, a pro-magician, you name them we had them.
Under a single roof we had each individual who had stood like a pillar, fought like crusader to see the most unconventional Indian IT venture prosper for a decade and half.
No hierarchy, no formalities, we rightly call ourselves Roboparivar
Image courtesy: Jeevan and team
Posted by Vigneshwar at 2:38 AM 1 comment:

Email ThisBlogThis!Share to TwitterShare to FacebookShare to Pinterest
Labels: Robosoft

Posted by Vigneshwar at 9:45 PM No comments: